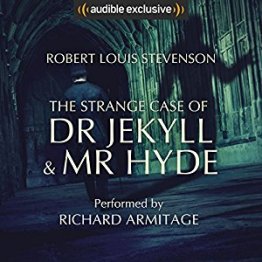 Almost everyone knows the story of The Strange Case of Dr Jekyll and Mr Hyde by Robert Louis Stevenson. I myself, though, had never read it, and listening to Richard Armitage perform it as an audiobook was a good first experience. Reading or listening to a book when you know the answer to the mystery, though, does take something away from the enjoyment. How wonderful and suspenseful it must have been to read this novella spoiler-free when it was first published in 1886!

Let me just say up front that I am a sucker for Victorian English. I love the wonderful use of words and the elaborate sentence structure.

I especially love Victorian English when performed by Richard Armitage. Somehow, his voice and accent are so well-suited to it and bring it fully to life. (I absolutely love his rendition of Dickens’ David Copperfield.) I do find, though, that it takes me a while shift my modern listening mode to an “archaic” language mindset and to really hear the meaning and not just the beauty of the writing. And sometimes the words are unusual, like when the characters saw several “phials” and “kernels”. I was thinking file folders and popcorn, rather than vials and bits of powder!

The audiobook is around 6 1/2 hours long. The structure of the Jekyll and Hyde novella is interesting and reminds me of what they were trying to do, but much less successfully, in Wolverine: The Long Night. Mr Hyde is rarely seen in the story, but more experienced through the words of others. The events are narrated by Jekyll’s friend, Gabriel John Utterson, who is a lawyer and the keeper of Jekyll’s will, in which he leaves everything to the unknown Mr Hyde. Utterson carries us through the first two hours of the story as he discovers more about Edward Hyde’s activities and the strange connection between him and the respectable doctor, Henry Jekyll.

Utterson is someone who experiences impulses towards indulgent activities, but he takes it as a point of pride that he is well able to suppress them. This is in stark contrast to his friend Jekkyl, who gives in to his own impulses and nurtures them, until finally he is completely lost to the darkness that he has tapped into. Interestingly, the version of The Strange Case of Dr Jekyll and Mr Hyde that went to publication is a much-toned-down version of the original manuscript, written after a dream and more explicitly dealing with vices, according to this article in The Guardian. (Stevenson also was a writer of children’s books and I remember well reading and enjoying A Child’s Garden of Verses as a child.)

There is a climax to the action in The Strange Case of Dr Jekyll and Mr Hyde, after which the remaining four hours of the story take place through written records left by Jekkyl and another friend, Dr Lanyon. The two men along with Utterson were all at school together and have maintained a friendship over the years, despite Lanyon having had a professional disagreement with Jekkyl over his research. Dr Lanyon’s account is filled with the horror that he felt in seeing something so unnatural. But it is Jekkyl’s account that really explains the journey that he took — one that at first was freeing and exciting, but that later became a devastating trap that he could not escape.

As I mentioned earlier, I love to listen to Richard Armitage deliver the formal English used in Victorian writing. His voices for the three men and peripheral characters are all well-differentiated, making it easy to follow along. When we hear bits of Hyde in the first part of the book, Armitage presents a sound that is scratchy and dusty, as if Hyde’s voice has been underused, fitting the character very well.

I had been on the lookout for what Armitage had described as “a really exciting experiment [that he] didn’t plan for… at all,” but I actually missed it on my first listen. In his 11-minute interview for Audible (available for free here), Armitage excitedly related how he “realized that you can describe the transformation of the character, but actually to change the voice, to sort of find this transformation in the voice (because Jekyll and Hyde have very different voices) and as it’s being described, [he] worked on shifting it to his voice…” He tried to make “…the voice change quicker, ’cause that’s one of other things in the book which is so exciting is the speed at which the changes happen within him. They get quicker and the drugs don’t work anymore…” 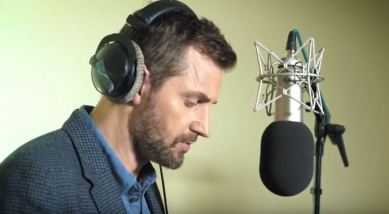 On my second listen, I realized what he was doing and what I had missed on the first round. While reading Jekyll’s account of the days from the first experiment until the climax, Armitage so gradually shifts his voice back and forth between the higher-pitched Jekyll and a much lower, more gravelly Hyde. It is almost a glissando, as the shift goes up or down a range of pitches as the words continue to be spoken. As the transformations to Hyde are being described, the voice gradually moves down almost into Armitage’s chest, and then reverses as Jekyll takes over again. It’s interesting and fitting, but maybe not quite as exciting as it felt to Armitage and his producer while they were making the recording. 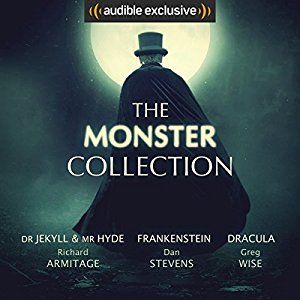 I bought The Strange Case of Dr Jekyll and Mr Hyde on iTunes as part of The Monster Collection. There is a scholarly introduction, which I didn’t find particularly interesting. I still have some listening to look forward to, as the collection includes Mary Shelley’s Frankenstein, recorded in 2013 by Dan Stevens, and Bram Stoker’s Dracula, narrated by Greg Wise in 2008. I’ve heard samples of both, and I’m definitely looking forward to them. For now, though, I’m listing to the new Armitage audiobook released just this week, Their Lost Daughters, a police procedural written by Joy Ellis.