Wine and Armitage… two of my favourite things. In the summer, we travel every year to the Okanagan wine region of British Columbia for a beach vacation. Of course, we always have to throw in a few visits to the local wineries!

Many of the wineries are located on high ground, with the best views of the surrounding countryside, and it’s very picturesque along the back roads too. (Views from Tinhorn Creek and from Burrowing Owl.) 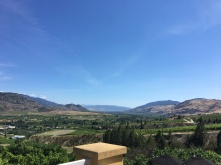 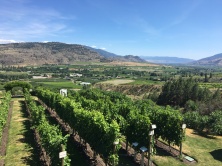 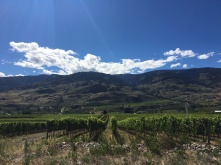 Stoneboat Vineyards is one of the cutest wineries I’ve seen, and their wine is nice too. I bought an excellent ice wine from there this year.

Many of the wineries have tasting rooms. Burrowing Owl also supports conservation of the burrowing owls in the area. And they make an excellent example of a Bordeaux-style wine with an ending that rhymes with Armitage! (Apparently, the word is a combination of “merit” and “heritage”.)

My favourite type of wine, though, is Pinot Noir — something that I have in common with Richard Armitage, according to various interviews. While he’s said in the past that he’s more into wine than beer, it sounds like he may not regularly drink wine or anything much anymore, except in service to his craft.

During the interview for the Wolverine: The Long Night podcast, he mentioned that he hadn’t “drank in around two years.” But then he told us that he “probably got through about two bottles of wine (!)” the night before a particular scene to dehydrate and make his voice rough. He said, “I turned up on that morning, for the bar scene, kind of in bar scene mode. I had a really bad hangover and I was like, ‘That was, that was not a good idea.’ But it kind of worked… I couldn’t find the voice without going to that place.” This was apparently a technique he also used to “wreck” his voice and make it deeper for the role of Thorin in The Hobbit. Good thing he doesn’t have to do that sort of thing too often!

Drinking wine is something he’s had to do in character, though, for many of his roles. Good thing he’s had personal experience! (Screen caps from RichardArmitageNet.com.) 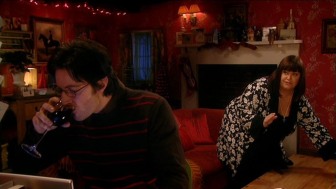 I wonder if the wine business is something he’d want to do in his down time, maybe while he’s waiting for his next big role? He mentioned setting up a production company — maybe he could produce wine instead of drama? Or maybe he could lend his voice to do some marketing for just the right winery?

There’s actually a winery in California run by a guy named Armitage! Armitage Wines advertises “award winning wine produced in the Santa Cruz Mountains with a focus on Pinot Noir!” And the home page sports a tiger’s face, reminiscent of Francis’ and Reba’s night out. What could be better?

Apparently, the winemaker “believes that if we quiet ourselves enough we can feel the plants vibrational energy speak to us.  This level of connection is what he believes separates one winemaker from the next allowing for great variation in ones (sic) development of wine.  He uses sacred geometry to pull this vibrational energy from the universe into the wine even during all phases of transformation.” Um… okay.

So what do you think? Has anyone ever tried the Armitage wine? The reviews on-line are good. A bit rich for my blood, though, at $55 U.S. for a bottle of Pinot Noir. Maybe if I’m ever passing that way…

51 thoughts on “Of Wine and Armitage”