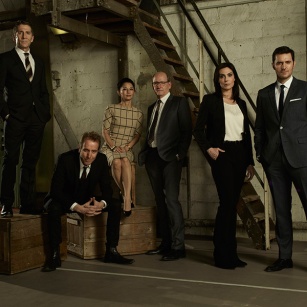 **SPOILERS** I finally bought Season 1 of Berlin Station on iTunes. Over the last week, I could barely wait to get home to see what would happen next! The show is a slow build, working up to fast-paced excitement in the last two episodes. As a vehicle for Richard Armitage’s acting skills, it is not as good as I had hoped. (Although he sure looks handsome and the steamy scenes sure are steamy!) But as an ensemble piece, I appreciated the various characters and their stories, which were compelling enough for me to keep watching to see how it all turned out. I like to watch spy thrillers, but I often find that I get lost in all the politics and intrigue — my brain just doesn’t work that way. But somehow this show with its build-up of information worked for me.

Berlin Station would probably have been more difficult to watch on a week-by-week basis. The story works really well, though, when you immerse yourself in the characters for a few episodes straight. The sound quality and enunciation are not as crisp as I would have liked, but with the iTunes version, I was able to rewind and turn on subtitles to make sure I got what was being said. And I’ve always loved the sound of the German language, so I’m glad to hear the actors switch back and forth between languages so frequently. Richard Armitage and Rhys Ifans both do pretty consistent American accents, with Armitage’s improving as the show goes on despite a few slip-ups early on. 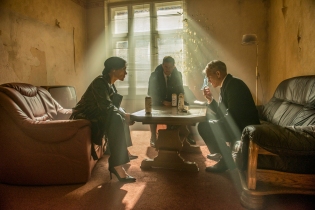 The atmosphere is gritty and dark, with the architecture and graffiti-covered walls of Berlin as the perfect back-drop. I loved all the rooftop scenes, especially with Hector and Daniel together, dangerously right on the edge. The costuming and set design fits with the no-nonsense mood of the show — nothing too flashy. I really liked Richard Armitage’s conservative suits, with crisp white shirt and skinny tie — suave and without the dad look of his Into the Storm suit. His sweaters, jackets and coats were nice too, standard issue and not too modern. 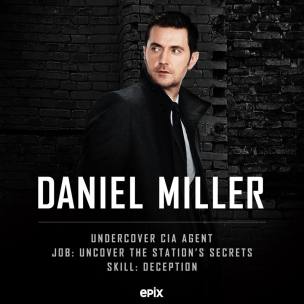 It’s interesting that the publicity bills Richard Armitage as the star of the show. I get that his character is supposed to be our eyes on the action, but Daniel Miller is so one-dimensional that he really just fades into the background. I suppose the point is supposed to be that he is the consummate spy, with all of his emotions buried so deeply that even he can’t touch them. It certainly means that he can put himself into any situation and play the part, as he did so beautifully with Claudia Gartner (Sylvia Hoecks). But is Daniel actually good at his job? Certainly Hector De Jean has the goods on Daniel… he knows that Daniel misjudged a situation so badly that many people died. So, is Daniel constantly trying to prove that he really is competent? I think that there is a lot of room to develop this character in Season 2, and I hope that the writers give Richard Armitage a chance to perform in a deeper role.

I remember hearing Richard Armitage say that he originally wanted the role of Hector De Jean. De Jean has such an interesting story line, and Rhys Ifans plays the perfect conniving and yet emotional man. Hector has so many fascinating relationships — the rivalry/friendship with Daniel, the co-dependency with Julian De Vos, the barter/love (maybe?) arrangement with Faisal Al-Fakeeh, and the more traditional relationship with Clare Itani. His PTSD, delusions, and deep seated resentments, combined with his essentially caring nature, are fascinating, and Rhys Ifans impressed me with his ability to convey all of that.

Richard Jenkins as Steven Frost was not a surprise, as I really enjoyed him in Six Feet Under. His character is another that is really well-rounded, with all of his increasingly desperate moves seeming to tie back ultimately to his love for his wife. I could see how, for him, even his affair with Sandra Abe (Tamlyn Tomita) could be intended to protect his wife from what she shouldn’t have to know about his job.

I loved Robert Kirsch’s character of Leland Orser. Naked ambition, offset by his struggle to do the right thing in the end, makes for an interesting journey. His loneliness for his son and maybe for a significant other and his search for meaning through ties to religion and Israel are gripping to watch. And I really was rooting for the foul-mouthed realist that he plays.

Julian De Vos is such a mysterious character and Sabin Tambrea does a fantastic job of playing both sides of this ultimately doomed individual. He’s been through so much and is so attached to Hector, and the feeling is mutual. His scene singing Bowie in the bathroom is just so unguarded, and to go from that to the puppy-dog eyes at Hector shows a wide range of abilities.

For the most part, the female characters are not as well-rounded as the men. I don’t have a good sense of what is going on for any of them — Valerie Edwards (Michelle Forbes), Sandra Abe (Tamlyn Tomita), Kelly Frost (Caroline Goodall), and Esther Krug (Mina Tander).  Even Ingrid Hollenbeck (Victoria Mayer) seems more like a tool to get the news out than a real person. I’d bet they each have quite a story to tell, and I hope they get to do that in Season 2.

The last two episodes are a much faster pace than the rest of the show, and I felt that they could have been stretched out a bit longer. Daniel suddenly being the only one who can pull it all together seems a bit unrealistic to me, with everyone waiting to hear his brilliant conclusion. I kind of felt that way even in the trailer, with him saying something about him being the only one who’s noticed a connection. I didn’t get the sense that he was the smartest guy there, but we’ll see what Season 2 brings. I’m excited for the new female characters, especially Ashley Judd as the station chief. There should be some interesting tension there between her character and Leland Orser and Valerie Edwards.

And here’s hoping that I get to see it here in Canada before the future iTunes release!