Monday was a great day. I spent the morning and afternoon with a group of my colleagues in an excellent training session, looking at the water and the mountains. And in the evening, I saw one of the best concerts I’ve seen in a long time. 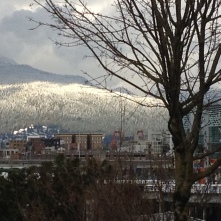 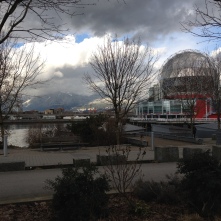 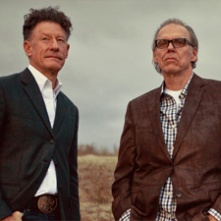 Lyle Lovett and John Hiatt, each being a successful artist in his own right, have been coming together to perform off and on since the ’80’s. Both are accomplished songwriters and guitar players, and their easy camaraderie and love of each other’s music make for a really enjoyable show. One of them joked that it was like sitting around the campfire with them, and that’s a good description.

In this acoustic show, they took turns singing their own and others’ songs, joining in to harmonize or to accompany each other on guitar — or in Hiatt’s case, on harmonica or with tuneful whistling. And in between, they traded stories and banter that were laugh-out-loud funny — in fact, I think there was more laughter here than at the comedy show I saw in the same venue last week!

Lyle Lovett speaks with a thin, almost reedy voice, but when he sings, his voice is deep and wonderfully unique. He sang some of my favourites, including “Her First Mistake” and “(One-Eyed) Fiona”, the latter complete with a hilarious story about an audience member years ago who felt compelled to remove and show them his glass eye! Lovett also played one of his best-known songs, “If I Had a Boat”, which he said was in a way a tribute to his parents, who allowed him to pursue whatever dreams he had.

John Hiatt’s voice is harsh and raspy, but somehow suits the songs he writes. His songs have been hits for many people, including Three Dog Night with “Sure As I’m Sittin’ Here” and Bonnie Raitt with “Thing Called Love”. Hiatt and Lovett did “Thing Called Love” on Monday, acoustic but still bluesy. Here are Bonnie Raitt and John Hiatt performing the more-often-heard version at Farm Aid in 1990:

Hiatt and Lovett played for more than two hours on Monday, holding the audience completely spellbound. Several blues classics were thrown in, going back to Hiatt’s roots — he used to be in Ry Cooder’s band and also went on the road with Sonny Terry & Brownie Mcghee. The finale of the show was “My Baby Don’t Tolerate”, with some “guitar humour” thrown in as they traded notes back and forth (visit Rock Links for a 2010 performance on BBC 4 Songwriters’ Circle). All in all, a great evening and a show well worth seeing, if you ever have a chance.