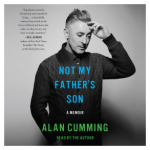 Listening to Alan Cumming’s 2014 memoir was just as engrossing the second time as it was the first. His slightly gruff voice with its pleasing Scottish accent tells a moving and fascinating story. In fact, there are actually three stories going on at once!

The book also explores Cumming’s childhood, where he endured abuse at the hands of his father. This could potentially be a trigger for some listeners, as he describes the incidents and their impact quite vividly. But he uses them to connect to the effects on his adult life and to how he feels about his father’s shocking revelation.

The stories are told with humour and passion, as you would expect from such a talented actor and performer. The profanity used is only enough to convey the emotions being experienced. As he draws comparisons between himself and his grandfather and reflects on his relationship with his father, we are let in on the happenings in his current world (2010) in the business and with his greatest support, his husband Grant.

This moving and well-told memoir is well worth a listen. ﻿The audiobook is available on Audible and on iTunes and won two 2015 Audie Awards, for Autobiography/Memoir and for Narration by the Author.

6 thoughts on “Not My Father’s Son”