I’m having a lot of fun answering the fandom challenge issued by Guylty and reading other Armitage Appreciators’ responses too! Here are my answers to questions 8 to 10 (which by the way have spoilers for those who have not seen these roles). For my responses to questions 1 to 7, go to RA Challenge – Week 1.

My favourite rivalry would definitely be John Porter and Hugh Collinson in Strike Back. There is a constantly shifting balance of power and of knowledge, beginning with Porter being in command and Collinson being unskilled at weapons and combat, and then with Collinson becoming highly respected in his position and Porter having fallen so far from grace. Later, when Porter’s specialized skills make him valuable again, Collinson views him as a threat, fearing that he may discover the truth.

After the original mission, Collinson must live with both the knowledge of what actually happened and the effect that his actions have had on Porter. As the knowledge of wrong-doing and betrayal becomes clear to Porter, the balance of power shifts over to him. Their confrontation in the desert brings it all to a head, with skilled performances from both actors. As Armitage said in a Cinemax interview, “It was two guys basically beating the hell out of each other, for all of this kind of baggage that they’d carried for so many years.” Andrew Lincoln (Collinson) was really taken by surprise by how real the physical aspects of the fight were, saying of Armitage, “In our fight sequence it’s pretty intense. He’s quite a big guy and he winded me a couple of times. He didn’t pull any punches and I think he was in character too much!”

My least favourite rivalry is Robin Hood and Guy of Gisborne in Robin Hood. I guess I go into GPM (Guy Protection Mode) as he is made to look silly or stupid over and over again. It is a cartoon rivalry and you can almost hear Guy say, “Curses! Foiled again!” And yet Armitage plays Guy with such nuanced characterization, that I feel he deserves a rivalry with more realism, paying respect to the character’s skills and ambitions.

The funniest moment in character for me is the whole of Armitage’s stint on The Vicar of Dibley… although actually, whether you could say he is truly in character is debatable. He doesn’t really need to do a whole lot of acting, more like reacting to how funny he finds Dawn French! The funniest moment is after Geraldine realizes that it is her that Harry really wants to marry. When she screams in his face, his (Armitage’s) reaction is priceless!

The funniest moment in DVD commentary is Armitage’s reaction as the cast are watching the final episode of Series 2 of Robin Hood. Marian’s line is “Well, can we at least get this out of me… it hurts” and someone adds “…Vicar”. Armitage says, “Is that her line? ‘Get this thing out of me?” and he dissolves into helpless giggles!

One of the funniest moments in an interview is when George Stroumboulopoulos shows a fan video entitled, “What is it about Richard Armitage? That makes us just wanna make love to him?” (Romana 55 Productions 2008), which includes footage of a bare-chested Guy and some revealing Speedo footage from Cold Feet. Armitage jumps the space between their chairs and pretends to strangle Stroumbo!

The saddest moment of all time has to be when Sir Guy of Gisborne kills Marian in the last episode of Robin Hood, Series 2. Don’t get me wrong — I am not sad that Marian died per se, I am sad for poor tortured Guy. Marian had toyed with his affections over the course of two series. Guy had hoped beyond hope that Marian would in fact marry him in the end. Instead, she taunts him and flaunts her love for Robin in Guy’s face.

Guy’s split-second reaction is something that he instantaneously regrets. The acting on Armitage’s part is so beautiful, with a full range of changing emotions played out fully on his face. The tragedy is that Guy cannot ever take back this so permanent action. And living with what he has done, both to her and to himself, is something that he then has to endure, even while wishing for his own life to end. 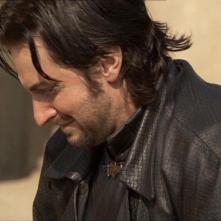 … answers to be continued.