With my family’s permission, I co-opted the first two evenings of vacation viewing for Castlevania on Netflix. That wasn’t too difficult since they all play video games, and my husband is a particular fan of vampire movies and certain animated shows. I am happy to report that we all enjoyed the show!

We arrived in Osoyoos on Saturday evening, after a 5-hour drive, coming in to sunshine and weather in the low- to mid-thirties (Celcius). Osoyoos is Canada’s only desert, complete with cactus, sage, and wild horses. But in the middle is a lake that’s great for swimming and boating and with beautiful beaches lining the shores. This year, though, it’s hard to see the sun or the mountains because of the smoke from the forest fires near Princeton, around an hour away from Osoyoos. Having started on Friday, the 2,000-hectare fire as of right now is “0% contained and out of control”, very scary for emergency responders and for the nearby residents, many of whom have been evacuated. (Canadian Red Cross runs the British Columbia Fires Appeal for anyone wishing to donate.) Here is the view from our balcony in Osoyoos, when we arrived on Saturday in sunshine and then this morning with a blanket of smoke. 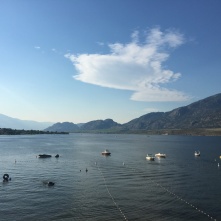 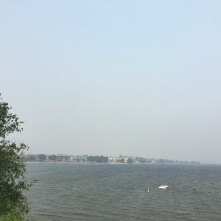 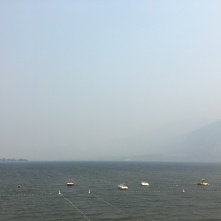 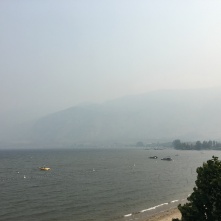 Perhaps the smoky atmosphere is somewhat conducive to watching a series where parts of Wallachia are burning! We sat down to watch the first two episodes of Castlevania on Saturday evening. I don’t have a lot of experience with anime, mainly  having watched some of my older son’s favourites when he was young — Pokémon (a really choppy in-your-face kind of show) and the beautiful movies by Hayao Miyazaki (My Neighbor Totoro was our favourite). In North America, we are more used to cartoons that try for realism and true-to-life motion, particularly when aimed at adults.

Castlevania has a dark beauty in its hand-drawn scenery and characters, and you get used to the camera panning over still shots. The way the light comes through demonic eyes and the red glow of flames is really stunning against the dark background. There’s a lot of gore which seems a bit excessive to me, but probably wouldn’t seem that way in context of video games.

Being mainly there to hear Richard Armitage voice Trevor Belmont, I found the first episode a bit slow. It’s good to get the backstory of this version of Dracula and to hear Graham McTavish bring his voice talent to the role. (I loved [to hate] him in Outlander as Dougal Mackenzie, and of course we know him as Dwalin in The Hobbit movies.) It’s too bad, though, that the character of Lisa Tepes doesn’t get more screen time as an intelligent, strong and determined woman.

With Dracula being somewhat of a sympathetic character (with a severe overreaction!), the main villain is the bishop, voiced so well by Matt Frewer, a Canadian/American actor most famous for the iconic Max Headroom. More recently, he played Dr Aldous Leekie, a powerful Neolutionist villain in one of my favourite shows, Orphan Black. A wonderful bad guy in that show and in Castlevania!

At the end of Episode 1, we finally are introduced to Trevor Belmont in a funny (if very crude) barroom scene. Having just seen The Crucible on the big screen, my ears were primed for more of a booming John Proctor voice. But as observed by Servetus, the performance is in large part reminiscent of his earlier audiobooks where he played “an aristocrat from a Georgette Heyer book”. This works very well for the character of this bored, drunken outcast. I love that Richard Armitage is a chameleon not only in how he looks and carries himself for a role, but also in how he uses his voice. I did actually find him a bit hard to hear and to understand over the music and other background sounds, but some of that may have been the hotel room TV over the air conditioner noise! For the most part, I liked the music, particularly the theme song.

There is a lot of profanity and, combined with the gory violence, this isn’t a show for young kids. But I find that the swearing fits with the situations and adds to the impact of the sardonic commentary by Trevor Belmont. Had this been my first experience hearing Richard Armitage swear, though, I might have been taken aback! I remember when I first watched Strike Back, I had only seen him as John Thornton, Lucas North, and Thorin Oakenshield. So, hearing him swear as John Porter was as shocking to me as what Brad Paisley described in his song, “Little Moments”:

Well I’ll never forget the first time that I heard

Yeah, I know… silly fangirl, right? While it adds humanity to my mental construct, I suppose I wanted to see him as having more restraint than I do.

Anyway… back to Castlevania… The second episode is good, but still a bit of a slow build, as the stage is being set for the rest of the action. Really, what we all enjoyed the most were the third and fourth episodes. Plenty of action and lots of excitement during and in preparation for the big battles. And this is where Richard Armitage finally uses the commanding tone to rally the masses, as the character gains confidence and does what must be done!

The four episode series doesn’t get too far into the mission of Trevor Belmont and his companions, but it sure does a good job laying the foundation for future adventures… just when it really gets going, the series ends! We want more! So glad we are now promised another eight episodes!

8 thoughts on “Castlevania and a Smoky Vacation”