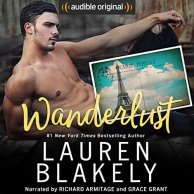 Needless to say, I bought the Wanderlust audiobook (on iTunes Canada) for the sole reason of listening to another Richard Armitage narration. I am not a big fan of pure contemporary romance and after reading a free short ebook also by Lauren Blakely, I was not really eager to listen to this one. However, being a fan of the Armitage voice, I did indeed download it for my drive to and from the office. 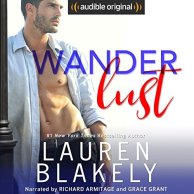 I was surprised to find that, while I didn’t love Wanderlust, I also didn’t hate it. And by the end, I can even say that I was mostly enjoying it. However, unlike most of the Armitage-narrated audiobooks that I own, I really doubt that I will listen to it a second time.

I found the original cover (1st image) distracting every time I turned on my phone to listen, since it didn’t fit my image of the male narrator. (And after Luscinnia pointed out that the “Eiffel Tower stands unsubtle proud and strong”, I couldn’t quite look at it the same way again!) I noticed today that Wanderlust now has a new cover (2nd image) on Audible and iTunes, which I like much better.

You really have to take Wanderlust for what it is — a contemporary romance with little substance to it, little research behind it, and a few sex scenes thrown in. The basic plot is that Joy has been transferred to Paris to run a fragrance lab. Her French is pretty much non-existent and so her company hires a translator (Griffin) for her for three months. Of course, they fall for each other, but there are obstacles to their being together.

Lauren Blakely (at right) is a prolific writer and according to her website “has plotted entire novels while walking her dogs.” I would generally not read a book by this particular writer, as I prefer more plot, more character development, and sex scenes (if any) that are less crass and more classy or at least more fitting with the characters. But, I can listen to it with the right narrator (i.e. Richard Armitage). And I even got caught up in the romance and was looking forward to my next car trip as the book went along.

On Griffin Being a “Translator”:

So. Overall, I enjoyed Armitage’s narration, but not Grant’s. I did got caught up in the romance, but didn’t like the crude language during and describing sex. I believe the book could have benefited from a more painstaking research and writing process. I didn’t hate this audiobook, but neither do I hope that Richard Armitage narrates another Lauren Blakely book.

14 thoughts on “Wanderlust: I Didn’t Hate It”