In a moment of spontaneity, on Saturday night I bought a ticket to the Juno Awards show, the annual celebration of Canadian music. It’s not quite my bucket-list event… that would be The Oscars, but that is unfortunately a members-only event. So, failing that, I thought I would take in the Junos, which since 1995 have been a fan event and this year were held in Vancouver.

The whole week was filled with music-related events, all helping to support school and youth music programs through MusiCounts. On Friday evening my family and I went to the Juno Cup. It was funny watching the Jock team (NHL players and Olympians) hold back to avoid beating the Rock team (musicians) too badly at hockey. It was fun, too, that the game was at one of the rinks where my younger son himself plays hockey. The two “teams” even had a skills competition, which included Jim Cuddy of Blue Rodeo singing the hit “Try”… and then Natalie Spooner of the Canadian National Women’s Hockey Team singing the same song and winning the point based on crowd support! Here’s the original 1987 version:

So, I bought myself one ticket to the Junos and sat only 3 rows from the floor, with this great view of the stage: 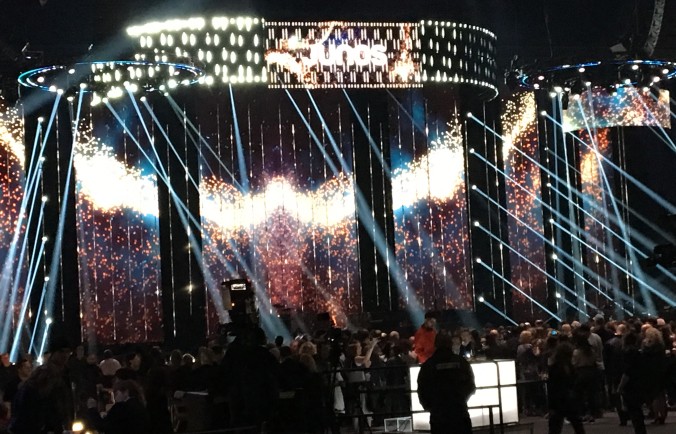 I would not have wanted to be on the floor, where there were no seats and the women were dancing around wearing super-high heals. Not to mention that the warm-up MC was exhorting them to party hard and be loud for the TV broadcast! No, I was content to sit in my seat, sip my red wine, and watch the show. 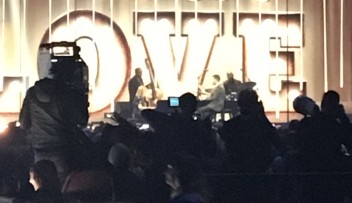 Host  and BC crooner Michael Bublé (who actually lives not too far from me) was funny and engaging and even sang a song with Diana Krall. (One time on a ferry to Vancouver Island, I was right next to Krall, her husband Elvis Costello [love him], and their kids, but with true Canadian reticence, I decided not to bother them.) Bublé and Krall, each of whom won album of the year in their own category, joined together to perform the Nat King Cole classic “L-O-V-E”.

One of my favourite performances of the night was The Jerry Cans singing “Northern Lights” or “Ukiuk”. From their website, “With a unique mix of traditional Inuit throat singing and roots-rock sung in the Indigenous language of Inuktitut, The Jerry Cans are a distinctly Northern sound.” (So glad the CBC had TV cameras there, or you would have seen this only from my phone!)

There was also a tribute to Gord Downie of The Tragically Hip, who passed away from brain cancer last year. Dallas Green (City and Colour) sang one of my favourite Hip songs, “Bobcageon”, which I talked about here. And then later, Downie’s brothers came up and gave a heart-felt speech while accepting an award for him for Artist of the Year.

I also really enjoyed singing along to the Barenaked Ladies performing “One Week” and “If I Had $1000000”.  Geddy Lee of Rush introduced them. He reminisced about an event I remember well — the performance that never happened, on New Year’s Eve in 1991 at Nathan Phillips Square in Toronto. Then Mayor Barbara Hall banned their performance because she felt that their name was politically incorrect! They went on to success in spite of their name (lol), and still continue recording even though Steven Page left the band in 2009. The 2018 Junos, the occasion of their induction into the Canadian Music Hall of Fame, was the first time in 9 years that Page had joined his former bandmates on stage. So cool to see them having so much fun and to be part of the crowd belting out “If I Had $1000000”!

It was a really great experience and I am so glad that I decided spur-of-the-moment to go to the Junos when the show came to town!