The anticipation is over… Thursday and Friday evening, I binge-watched Netflix’s The Stranger starring Richard Armitage. What a relief to find that the 8-episode series is actually good! The Stranger is based on Harlan Coben’s book of the same name. Red Production Company, Coben, and Danny Brocklehurst have collaborated on two previous series, but I think this is by far the best of the three, in part because Safe and The Five had fewer episodes to develop the many characters over. From interviews, I understand that the adaptation of The Stranger changed the story significantly from the book, and apparently even some of the detailed character history written by Armitage (including an unknown something taken from his own life) made its way into the script! Coben has a small cameo in the show as well.

The Stranger is a thriller and police procedural, with a lot going on, propelling the viewer to keep watching through to the end (and some brave souls even to binge-watch over one night!). The cast is wonderful, including of course Richard Armitage and, a former fellow actor from Sparkhouse, Siobhan Finneran who is perfect as the in-charge police detective. This series actually reminds me a lot in atmosphere and tone of Broadchurch, with the lives of the detectives being also an important part of the story. Jennifer Saunders, who I loved in Absolutely Fabulous and of course was Dawn French’s comedy partner, does very well in her first dramatic role. There is a lot of great camaraderie between Armitage and Shaun Dooley, playing neighbour and friend Doug Tripp. Really, the whole cast is very good and I can’t possibly mention them all, even though all the main characters are impressive.

Armitage has really mastered the dad character now, more so than in Brain on Fire or The Lodge, and there is a natural sense of fun between him and the boys, played by Jacob Dudman and Misha Handley.  He makes dad jokes, sings along to a “classic” song in the car, and even joins in their sports. I really loved seeing him in his happy husband and father role before the that seemingly idyllic life is disrupted. (And yet, I wonder why I enjoyed so much hearing him swear. He does it so precisely and emphatically… and I would hate to be on the receiving end of it!) 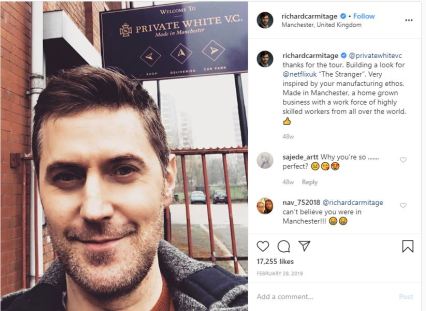 I really wish I knew how to screen-cap Netflix, because I’d love to include some of Armitage’s outfits. The colour choices of his casual clothes are new and look great on him, and I suppose he did a lot of the choosing himself, as mentioned in the Instagram post to the right. He plays a lawyer, and during a courtroom scene we see him with some particularly nice looking brown-framed glasses — I had to rewind a couple of times to have an extended look. On the other hand, at one point he wears a suit, white shirt, and beige trench coat, and the look reminds me of Berlin Station (even though I don’t think he wore that colour of coat in BS). I loved (for some reason) also the scenes in his house, where he is lounging barefoot — something so intimate about it.

I always appreciate how in English TV productions, the people in it mostly look like ordinary people that you might know in real life, rather than super-models. Armitage is someone I would like to know in real life, especially given the renewed interest that I’ve found through this show, but even he doesn’t look too out-of-the-ordinary. He is looking very fit in The Stranger, although the one glimpse of him in undies after a shower says to me that he isn’t working out like he used to and I think he said that he wanted to look like a regular guy. I think he succeeded… although more like a regular hot guy.

The series gives Richard Armitage lots of room to exercise his acting muscles, and he does so extremely believably. While he is prettier when he is happy and smiling, I do enjoy watching him react to strong emotions and stressful situations. I’m always on the lookout for his signature moves, such as eyelash batting and rubbing his hand across his face, and I was not disappointed, although the first is not as pronounced and the latter is quite natural with some new hand placement — wish I could screen-cap. (Recently, re-watching House M.D., I found myself very conscious of Hugh Laurie’s signature move of head down and staring to denote deep thinking about what’s just been said. The more you watch someone, the more you can’t help but notice and anticipate these acting tics.)

I would recommend The Stranger, and I’m looking forward to watching it again. I think i may even have convinced my husband to watch it!

Given that a lot of the show is about the secrets that we hide, I’m putting Billy Joel’s song “The Stranger” here (lyrics start at 1:13) as well as the Netflix trailer for the show.