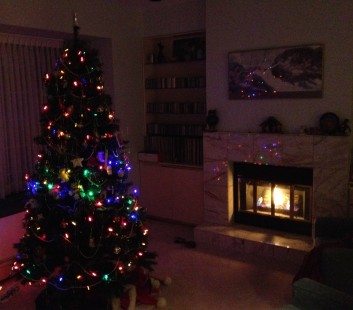 Our tree comes down this weekend. We’ve always followed the tradition of leaving the tree up until January 6 (or the weekend after when the work week is done).  I believe the idea is for the star at the top of the tree to light the way of the three wise men for the 12 days after Christmas…. of course my tree topper is an angel not a star, but still….

This is the first year that it’s been consistently cold enough here to have the fireplace on.  It’s been wonderful to curl up in an armchair by the fireplace and read a good book, while the Christmas lights are lit on the tree.  So peaceful.

In Vancouver, we are supposed to be able to barbecue year-round.  Given the amount of snow that was on my outside table after the second snow fall, I don’t think that will be happening this year! We live on a street that is low on the municipal snow removal list — not a major traffic route, not a bus route, not a school zone — so salting and snow removal comes when they have time. Our mail delivery has been down to once-a-week since before Christmas!

The snow has melted quite a bit now, but apparently another 2 to 5 centimetres are coming (or it could come as rain instead!).  While it was nice to have a White Christmas, I was really hoping that once we were done with the decorations, the snow would be done too.

During last week’s snowfall, I caught this rather unique scene of snow falling and one of our ever-present seagulls perching on the chimney, probably wondering what had happened to the mild coastal weather.  (I’ve been wondering that myself!)  Last week, for the first time in 20 years, the City of Vancouver posted signs that one of the City lakes is safe for skating, with 12 centimetres of ice.  Lots of people (not me though) strapped on skates to take advantage of this rare occurrence.

I will leave you with a song that matches my contemplative mood about the winter weather.   “Song for a Winter’s Night” was written and recorded nearly 50 years ago by Ontario native Gordon Lightfoot.  It has been recorded by various artists, including more than once by fellow Canadian, Sarah McLachlan.  Here is a nice YouTube video of one of her versions, complete with falling snow.

6 thoughts on “And the Tree Comes Down”