Guyliner is a makeup technique that can make a guy look really bad-ass. And perhaps Richard Armitage as Sir Guy of Gisborne wore it best.  Together with his so blue eyes and his dyed black hair, the GUY-liner marked him as the baddie that you couldn’t tear your eyes away from.

Over the past year, I’ve discovered a very appealing alternative to (but not replacement for) the much appreciated GUY-liner…. Introducing LUCI-liner! 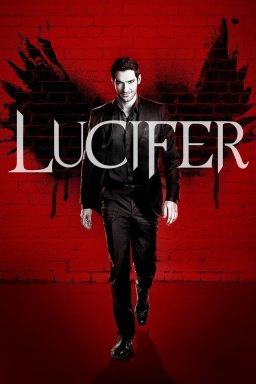 How could there be a bigger baddie than the Devil himself?  Lucifer on FOX starts with the premise that Lucifer Morningstar (a.k.a. the Devil) is tired of running Hell and is now enjoying a semi-permanent vacation in L.A.  He owns an upscale night-club and parties to his heart’s content, with his faithful demon protector, Maze, at his side.

And then he meets the lovely detective, Chloe Decker, and can’t understand why she seems to be immune to his powers — he can make a person reveal their deepest desire, and all women (except Chloe) fall head over heals for Lucifer.  This woman who is not affected by him is strangely appealing and before too long, the two of them are working homicide cases together, coupling her skill as a detective with his special powers.  He is very honest in telling everyone exactly who he is, but of course no one actually believes him!  Not even his therapist!

This show is really a lot of fun.  The witty banter reminds me of Castle, or reaching further back, of Moonlighting.  Throw in Chloe’s ex-husband who Lucifer calls Detective Douche (jealous much?) and Lucifer’s brother and other relatives and it makes for a really good story.  And good viewing, with the 6’3″ Ellis looking devilishly handsome in some well-cut suits!

Tom Ellis is a Welsh-born actor with a lengthy résumé in the U.K., including stints on the BBC sitcom Miranda and on the soap EastEnders.  In 2014 he also starred in the medical drama series Rush on USA Network (which actually filmed in the Vancouver area).  Ellis (whose own father was a Baptist pastor) was really interested in exploring Lucifer as a tortured soul whose Dad (a.k.a. God) banished him to Hell — Daddy issues, for sure.  But it’s definitely done with a humourous twist.

In Season 2, there is an interesting story line where Ellis really gets to show his acting abilities beyond the banter.  A major incident in Episode 5 affects Lucifer in a very similar way to the way Marian’s fate affected Sir Guy in Robin Hood.  Ellis does a great job with the micro-expressions needed to convey the intensity of Lucifer’s emotions and lets us see the desperation in the downward spiral of self-destructive behaviour in the following episode.

Lucifer has been on hiatus, but is returning on Monday with Season 2, Episode 11.

For more on GUY-liner, take a look at The Gizzy Guide to Guyliner and Man Makeup on The Richard Armitage Fan Blog from 2010.

Fatima at Stacks and Ranges has also written about the remarkably similar costuming of Sir Guy of Gisborne in Robin Hood and Ellis’ character in Merlin in A Fun Post About Types.

16 thoughts on “Alternative to GUY-liner?”