December 23 (left in the comments at Guylty Pleasure)

I’m just so excited to actually win
The RA initials made into a pin.
So thank you to Guylty (and to Hari too).
In closing I’ll say, “Merry Christmas to you!”

It’s been near a month (yes it’s been quite a while)
Since Guylty’s fine work left the Emerald Isle.
I wait by the door but the postman won’t come.
The thought that it’s lost has me feeling quite glum.

The package is lost — and so is the broach.
(Or could it be coming by boat, mule and coach?)
But wait– in the Valentine’s raffle I’ve won
A cover to put on my favourite cushion! 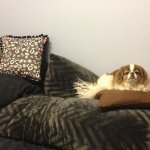 I was working quite late when my telephone rang.
“It’s me on the phone,” my younger son sang.
“Your package from Ireland — it’s finally come!”
And it wasn’t from V-Day but from the Christmas one!

So when I got home I opened it up.
I put on the pin and on chocolate did sup.
Apparently Thornton makes chocolate not cotton,
Plus a photo from Guylty I’d generously gotten! 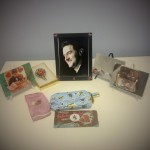 It’s the end of the work week and what do I see?
Two Valentine packages waiting for me!
Ms. Guylty’s fine fabrics she’s made into gifts
And craftily made sure my spirits would lift!

So now as a fangirl my week is complete.
My basket is full of these goodies and treats!
And now when my work stress is getting me down,
My RA collection will bring me around! 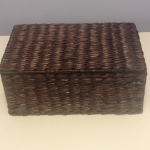 Thanks, Guylty, for the anticipation and the collection!

8 thoughts on “Waiting for Guylty Treasures: A Saga in Verse, Links, and Pictures”