Wow! What a show! This new production of the 1959 play was launched in September and is based on the 2015 national tour production. The new players bring a freshness and brightness to this much-loved musical.  If the current tour it is coming to your city, I highly recommend going to see it.

My expectations were set by the 1965 musical film starring Julie Andrews and I was hoping that my internal sing-along to the iconic Rodgers and Hammerstein songs would not be thwarted. (A few years ago, I went to see “West Side Story”, only to find that half the songs were sung in Spanish!) This production of “The Sound of Music” uses the original 1959 libretto of Lindsay and Crouse, which itself was inspired by “The Story of the Trapp Family Singers” by Maria von Trapp. While the order of the songs is different than in the movie, lovers of the movie will not be disappointed.

When Jill-Christine Wiley as Maria started to sing “The hills are alive…” I actually got shivers! Her voice is just right, and she brings sparkling personality to the part. I found Mike McLean as Captain von Trapp to be a bit theatre-ish (unnaturally stilted) at the beginning, but as the Captain loosened up I grew to like him more and more. (Reminded me a bit of Jake Gyllenhaal.) His chemistry with Maria is palpable and their kisses are both romantic and passionate. 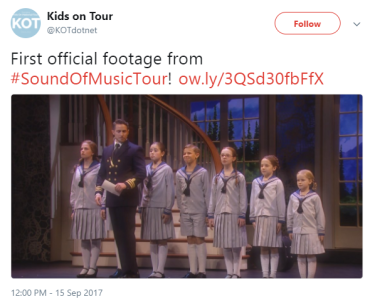 Throughout, I found myself wondering how they were able to find so many exceptional singers for the roles! Lauren Kidwell as the Mother Abbess produces a soaring rendition of “Climb Every Mountain” that brought the loudest applause of the evening. On her first national tour, Keslie Ward as Liesl has a stage presence that reminds me of a young Judy Garland, although her wonderful voice is all her own. The children are so cute and funny, particularly the littlest one, and keep the audience smiling throughout.

In addition to the singing and the acting, one of the best things about this production is the stage backdrops. In the abbey, they are designed to give the impression of beautiful stained glass, creating a tranquil atmosphere with streams of light shining through onto the stage and the players. The von Trapp living room has lacy wallpaper setting the stage for the simple furniture. And when the family steps onstage at the music festival, tall red banners with stark black swastikas in the centre suddenly unfurl from the ceiling. At the performance I saw, you could hear the sharp intake of breath as the shockwave went through the audience.

I wished I could have gone back to see this more than once, as it was so good. My friend went home and watched the movie the next night to continue the experience.