Last week, my son’s school year was finally done and I had a one-evening reprieve from my killer workload. A group of 7 female colleagues from my office went to its first movie night (of many, I hope), choosing to see Ocean’s 8. We tried for a group of 8 in the spirit of the movie, but in the end one of the women had to miss out on the fun.

I actually found myself with a spare hour before meeting up with the others. What better thing to do than buy some shoes! Okay, well they are not Ocean’s 8 attire, but with my sprained ankles (six weeks in, now) these flats at 30% to 50% off were a great find. Yes, there’s a theme… black shoes go with pretty much anything… and I’ve got some options now. (I really miss wearing heals, though.) 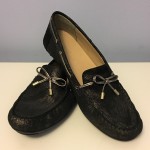 After stowing away my purchases in the back of my car, I headed up to the movie theatre. One of my friends had thrown in some coupons, so we each only ended up paying $10 per ticket. Armed with popcorn and a diet cherry Coke for dinner, I joined my work buddies in the last row of the cinema and settled in for the show.

I had been a bit skeptical about the movie, mainly because some of the Sandra Bullock movies I’ve seen have been duds, while others have been good. In fact, I probably wouldn’t have picked this movie if not for the “movie-boyfriend factor”. (Only two of my colleagues knew my main reason for being there.)

What a pleasant surprise! The movie was really good and we all enjoyed it. Right from the opening scene, it is obvious that the film had a decent budget and is well put-together. It is a good example of the heist genre and fits in well with the other films in the Ocean’s series, with the slick buddy-film tone and the snappy dialogue and humour. A good steady pace is maintained throughout the planning, execution, and aftermath of the heist and there are even a couple of hidden twists thrown in. For those who enjoy celebrity cameos and Met Gala-worthy fashion, they are both plentiful. 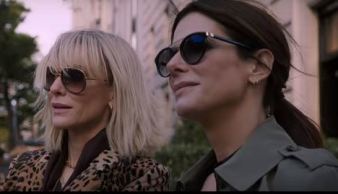 The best part of the movie for me, though, is watching these eight women work together doing something they are good at while thoroughly enjoying each others’ company. And this is obviously true for the actresses, as well as for the characters. Despite being in a heist plot that for most of us is not our every-day lives, the characters and relationships are very realistic. All of the female characters have their defined personalities and special skills, and the performances are all good. I especially enjoyed the interactions between Debbie Ocean (Sandra Bullock) and Lou (Cate Blanchett). The two characters work well together, and yet they are not afraid to call each other on their “shit”. In my opinion, the dialogue leaves it ambiguous as to whether they are only partners in crime or whether they had also been partners in life before Debbie got herself mixed up with Claude Becker (Richard Armitage).

Speaking of Armitage, it was really nice to see him back on the big screen. The last time I saw him on screen in the cinema was at last year’s Canadian screening of The Crucible. That was a fabulous experience, to see the filmed stage performance, with the larger-than-life Armitage excelling in the role of John Proctor. Of course, a supporting movie role is a very different and lower-key performance. He has quite a bit of screen time, although much of it is in shorter scenes, where he doesn’t really get to explore the character fully. He does, though, manage quite well to show Becker to be a very shallow and narcissistic man. And in fact he does have the only scene where I (not being a laugh-out-louder) actually laughed out loud. He had me laughing just with the look on his face during the scene pictured above.

I didn’t find the James Corden scenes at the end particularly funny. I do like his Carpool Karaoke, but I thought these scenes were just unnecessary. Anne Hathaway is very good as the insecure diva movie star, and I enjoyed her scenes with Richard Armitage and with the others involved in the caper. I actually hate to single out just a few of the women, as they all brought something unique to their scenes.

I’m looking forward to being able to see this again on the small screen, so that I can pause and rewind to really check out Armitage’s performance. But on the evening itself, my group of 7 thoroughly enjoyed the whole movie and we are looking forward to our next two planned outings —  Mamma Mia! Here We Go Again in July and Crazy Rich Asians in August.