At the end of June, I went to see Macbeth at Western Canada’s largest not-for-profit, professional Shakespeare festival, Bard on the Beach. My younger son read the Scottish play in his high school English class this year, so I had wanted to take him to see a performance. I thought about the National Theatre Live showing, but after reading Serv’s review, I decided to give it a miss. As luck would have it, though, Macbeth is one of this year’s plays at Bard, playing until September 13.

An outdoor picnic is so much fun! (Luckily, by the time we got there, the Vancouver rain had stopped.) Pre-ordered from Emelle’s Catering, each picnic has a theme relating to one of the productions. My son had the Yellow Submarine Supper (Beatles songs are a feature of the As You Like It production) with a Sgt Pepper’s salad. I kept to the Scottish theme with the Highland Feast, along with a glass of red wine. I really enjoyed the smoked salmon on the chive biscuits. 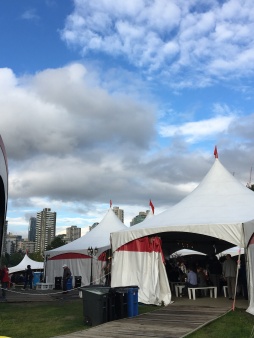 Bard on the Beach has been held at Vancouver’s Vanier Park, overlooking English Bay, for nearly 30 years. The tent city houses two stages, a Shakespeare-themed boutique, concession stands, and areas for educational talks. While I was there, I read a historical plaque detailing a shameful act of colonialism. The site used to be an indigenous village and later was turned into the Kitsilano Reserve. In 1913, the local powers-that-be judged the Reserve to be an impediment to “progress” and, in contravention of the Indian Act, paid the residents a small amount of money, herded them onto boats for relocation, and burned all of the houses to the ground. It is traditional now to acknowledge First Nations lands at events in Vancouver, and Macbeth began with an acknowledgement that we were on unceded territory of the Coast Salish peoples.

The Theatre and Stage

The main stage is located in a tent with tiered seating for 733 people and provides a view of the park and the water beyond. (I wish I could have taken pictures during the production, but of course that isn’t allowed.) The set design is quite minimalist, allowing free movement of the actors around the stage. The fencing you can see above is actually a balcony, which is well-used during the play, as are the aisles between the seats — at one point, my son nudged me and looking just over my right shoulder I saw the bloody ghost of Banquo looming over me!

My son and I enjoyed this production of Macbeth very much. It is a traditional presentation, set in the original time period and including the weird sisters (as opposed to the NT Live production). Being a bit of a purist, I really prefer this approach. The costumes are good, particularly the beautiful gowns of Lady Macbeth and Lady Macduff. The swordplay is well-choreographed and the action ranges over the full stage, balcony, and audience areas.

It is great to see such an excellent and racially diverse cast. Interestingly, Duncan’s two sons are played by a Black man and a Caucasian man, which I noticed and then forgot about. In terms of the delivery of the lines, I really like it when Shakespeare’s dialogue is spoken as if it is just a natural way to speak, instead of as a recitation of archaic language. In this, director Chris Abraham, has to be congratulated, as it really felt like listening in on a conversation, spoken in the actors’ natural accents.

Ben Carlson as Macbeth and Moya O’Connell as Lady Macbeth are wonderful. They subtly take the audience through a slow descent into madness, showing how one act of ambition and murder can poison the rest of one’s life. The weird sisters have just the right amount of mystical creepiness and glee, as they spin the fates of the players. A standout actor is Lindsey Angell as Lady MacDuff. In a short scene, she manages to convey such anguish and desperation about the fate of her family.

RA Fan A to Z Challenge (continued from here): F – Name a play that you wish RA would do. 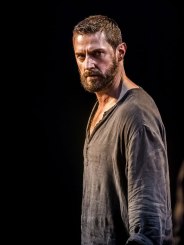 I know that Macbeth has been done, and done so many times, but watching this production, I could not help but imagine Richard Armitage in the role of Macbeth. What an opportunity for him to explore the ambition that drives a good man to evil. And to portray the madness as the character’s own demons come to haunt him and destroy him. I was recently reading The Last Kingdom (including The Lords of the North), and so I was thinking too during Macbeth about the role of fate and the three spinners, as Uhtred had done. I also was reminded of that story during the sword-fighting. I would like to see RA wield a sword again, as he did in Robin Hood, even if he would not be wearing the black leather! (Probably not the appropriate costume choice for Macbeth!)