So apparently this is my 200th post! At my current rate of posting, though, it would take me more than 8 years to reach 300! Probably I should post more. Be that as it may, I was really productive today! Inspired by Guylty’s clean-up (and the fear of next week’s visitors seeing how we really live), I cleaned up my home office/guest room. Maybe the tidiness will inspire me to sit down and blog more often.

This, unfortunately, is what my small room looked like before the clean-up. I was only going to take the picture on the left, but my husband seems to think that piling books on top of the bookcases is also not okay. (Probably true, since we live in a potential earthquake zone.) 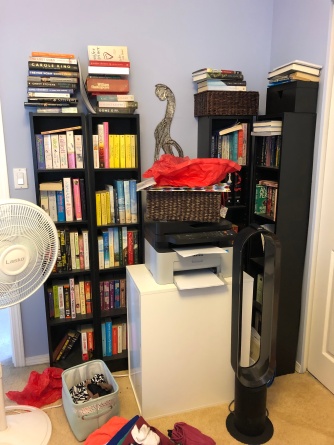 And here are the after images of my space, post-clean-up. The books on my desk are my “to be read” pile. I’ve never had one of the those until recently. Used to be that I would read faster than I could get books in. Now, unless I’m sitting on a beach, I seem to have trouble focusing. Too much going on I guess.

Next Saturday, we are giving a small dinner party, with some traditional recipes passed down in my husband’s family. Then on the Monday, his cousin’s son and the son’s girlfriend are coming to stay with us for two weeks. My younger son is giving up his room for the duration and so he will be moving into my office to sleep in his old bed, which now looks very inviting.

There is still a lot more cleaning to be done this week to be ready for the weekend. But the worst thing is that it coincides with Richard Armitage attending the Q&A at My Zoe at the TIFF! I had completely forgotten about these family obligations when his appearance at the Festival was announced. I was really pleased with myself that I had figured out a way to go to Toronto using points for the flight and only a bit of cash, taking two vacation days off work, and planning to ask to use my sister’s guest room. I came home all excited, telling my husband that the stars had finally aligned and I was going to Toronto to see Richard Armitage! “So, are we cancelling the dinner party?” asked my husband. And then I realized that it was impossible. Sigh. Just wasn’t meant to be I guess.

Anyway, otherwise, things have been going well. My younger son turned 18 (he shares a birthday with RA) and so we are now all adults in the house! He started college last Monday and so far it is such a better situation than when he was in high school. He was able to choose afternoon classes, so now I just have to wake him before I go to work and he does the rest himself. It’s hard to believe how much stress he and I were both under to try to get him to school for 8:45 a.m. — pretty much never happened, but he miraculously passed everything despite generally missing the first class of the day. Even more miraculous is that I actually survived the panic and stress of his, and therefore my, lateness.

The last two weeks back at work have been pretty relaxed, since my boss was away for the whole month of August. She’s back on Tuesday, though, so I fully expect to have to gear up again right away. At least I’m going into it rested.

And with a tidy home office!