Continuing on from here with Guylty’s Richard Armitage fandom challenge, here are my answers to questions #15 to #21:

#15 A Character Everybody Else Loves that I Hate: 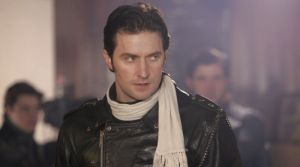 I can’t really say that I hate any of the characters that I’ve seen RA play. (Although the morals of Paul Andrews in Between the Sheets are deplorable.) I think that there are fans who like Ricky Deeming in George Gently more than I do… I found him to be a bit of a stereotyped character, at least with the white scarf and all. And while I like John Porter and Strike Back, I was so put off by the hair and look when he was down on his luck that I think that coloured some of the rest of the show for me.

#16 A Character Everybody Else Hates that I Love: 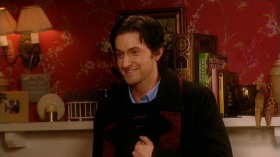 I think I like Harry Kennedy in The Vicar of Dibley more than some fans do. I like to believe that such a romance is possible, and I really like that RA laughs his way through the whole show. An adorable introverted accountant who is a perfect contrast to the feisty outgoing vicar.

This is really tough, because there aren’t really any characters in this category for me. So, I guess I will go again for the deliciously villainous Uriah Heep in the David Copperfield audiobook, as described in #14 of my Week 2.5 answers.

#18 Top 3 Things on My To-Do List if I Suddenly Found Myself Face to Face with RA:

In reality, I would probably be too shy to approach him and I wouldn’t want to intrude on his privacy.

Once at a Rod Stewart concert, I sat almost directly behind a much-loved singer through the whole show and couldn’t bring myself to talk to her. I was also on a ferry with Elvis Costello (big fan) and his wife Diana Krall — my husband went and said hello, but I just couldn’t. In an arranged fan moment for another performer, I did get an autograph and express my admiration so that kind of set up might be a bit easier for me, although a “real” moment would probably be more memorable.

I don’t have a problem with any ship (i.e. character or real person romantic pairing) in the fandom. But for myself, I would prefer to read about a character pairing envisioned by the original writer (canon) or a pairing with an original female character.

#20 The Best Fanfic I’ve Ever Read Involving RA or Characters:

My favourite fanfic is Manna from Heaven by Zeesmuse which I previously posted about here and which the author talks about here. It stars Sir Guy of Gisborne of Robin Hood fame and a modern-day woman who falls from the sky, courtesy of angels, into the path of Sir Guy. Just a wonderful pairing and story. Zee has just posted a new chapter of the sequel, Aside from Heaven, which I plan to download this weekend!

For a shorter story, also involving Sir Guy (sensing a theme?) but with a Marian who is much more interested than usual, I enjoyed The Chest by Judiang. A link to the story can be found in the comments in her March 16, 2017 post.

That probably depends on what day you ask on (or maybe on who you ask!). I’m answering RA Challenge questions, so that probably means I’m fairly obsessed! I watch and listen to a lot of his work, but I haven’t seen/heard it all. I haven’t traveled far away to see a play or attend a fan event. But on the other hand, on the day the tickets went on sale, I paid for a seat at the Cineplex showing of The Crucible coming up in July, even though I have a digital copy at home!

Degree of obsession is in the eye of the beholder.

… To be continued next week.