I do love musicals, and I was lucky enough to see three different types of production in just over a week! Busy, but fun! All with good companions and none too expensive. 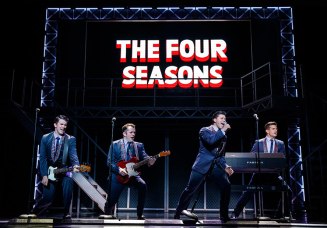 My younger son and I went to see the touring production of Jersey Boys — yes, that’s right… my heavy-metal-loving son came to a show full of falsetto doo-wop singing and loved it! The play is fast-paced and this touring company is amazingly talented. It’s the true story of The Four Seasons, who came from a neighbourhood where petty crime was the norm and rose to international fame and top 10 hits, with lots of bumps along the way.

I had seen the movie and enjoyed it, but this production far surpasses the movie. The songs (“Sherry Baby”, “Big Girls Don’t Cry”, “Walk Like a Man”, and many more) have an authentic sound and the choreographed moves are perfect, even synching with the original black-and-white TV appearances shown from time-to-time on the screen above the stage! In particular I found the guy who plays Frankie Valli, fellow Canadian Jonny Wexler, to be really impressive. I also appreciated Corey Greenan as the forcefully in-charge Tommy DeVito. Sean Burns adds some funny moments as Joe Pesci (yes, that Joe Pesci, who was instrumental in bringing songwriter and performer Bob Gaudio to the group). The tour of Jersey Boys continues in the US until June 24, 2018 with details here.

The old Hollywood musicals were something I used to enjoy watching with my Mum. Last week, I went with some friends from work to see the in-cinema showing of last year’s Broadway production of the Irving Berlin musical, Holiday Inn. This Roundhouse production was staged at the old Studio 54 and captured live in HD, and it has been making the rounds of select movie cinemas just in time for the holiday season. 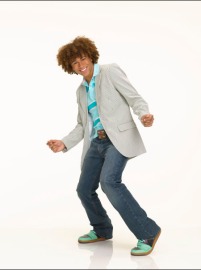 It’s a great production, with all the songs we know and love, like “Blue Skies”, “Cheek to Cheek”, and of course “White Christmas”. It’s funny as well, and the music and choreography are so well done, with one of the best dance scenes involving complicated steps over fast-turning skipping ropes! Check out this rehearsal footage with the  skipping (around 1:57), as well as a taste of their singing and dancing. The leads (Bryce Pinkham and Lora Lee Gayer; Corbin Bleu and Megan Sikora) are really good and have great chemistry together. Incidentally, Corbin Bleu was one of the stand-outs in Disney’s High School Musical (photo left from IMDb) starting around ten years ago, and his talent and polish have only grown.

One of the things that really impresses me about this production is how racially diverse the cast is. It certainly seems that the company were chosen for their talent, as they should be. I understand that in the original 1942 movie (starring Bing Crosby, Marjorie Reynolds, Fred Astaire, and Virginia Dale), there was actually a blackface number for the inn’s show in honour of Lincoln’s birthday! Holiday Inn has come a long way since then!

In addition to showing in some cinemas, this recording of Holiday Inn is available on the Broadway HD site, which offers one-time rentals, as well as monthly or annual subscriptions. The preview is available here.

Joseph and the Amazing Technicolor Dreamcoat:

I also went to a local production of Joseph and the Amazing Technicolor Dreamcoat, when my friend suddenly had an extra ticket. This company had staged the play the year before with the same cast and it was so popular that they brought it back again. I myself hadn’t seen Joseph before and frankly I don’t think I would see it again. I’m not sure whether it was just this production, but the teacher/narrator with the children’s class/chorus just seemed annoying to me, especially since I didn’t like her voice. I think I would have preferred to just see Joseph’s story itself, without the artifice of the school field trip.

Stuart Barkley, the lead in this production, was very good (and apparently a weight lifter as well!). There were some funny moments, particularly with the actors playing Joseph’s brothers really hamming it up. The best part was the Elvis-styled number, “Song of the King (Seven Fat Cows)” done by Justin Lapena as Pharoah, practically rivaling this version by Robert Torti from the televised movie (starring Donny Osmond):

Between all the musicals I’ve been seeing and being a hockey mum, I’ve hardly been home at all lately! I should probably slow down a bit, but now begin the seasonal festivities… holiday parties, Christmas markets, holiday pantos, shopping, and all the rest! Wish me energy!