What a busy summer it’s been, and now the rain has finally come! I just realized that it’s been two months since I last posted about the RA Challenge! Before I get back to that, let me show you what I ordered from Etsy thanks to seeing them via Guylty’s Weekly Roundup of Tumblr posts yesterday. 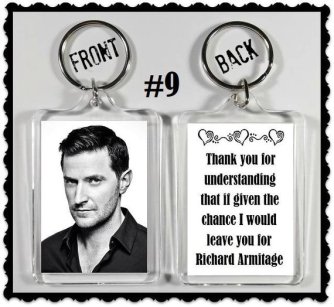 And now, without further ado…

G — How long have you been in the fandom, and how has your attitude to the fandom changed during that time?

I’ve never been involved in a fandom before. I’ve been a fan of singers and actors in the past, but I’ve always just enjoyed that by myself (binge-watching all the Jeff Goldblum movies I could find at the video store pre-kids, for example) or by going to movies or concerts with friends. I’d heard of formal fan clubs, of course, but I didn’t really know about internet fandom at all.

I saw North and South on Netflix sometime around 2011 or maybe a bit earlier, and then started becoming more interested in RA after a couple of watches. I browsed around the internet and found interviews and some blogs, but I only visited from time to time, not really ever having encountered blogs before. I borrowed MI-5 (Spooks) from the library and enjoyed that, and I remember being excited to hear that RA had landed a part in The Hobbit and mentioning it to my husband. My increasing interest in RA was a slow burn, so it took me a while to get involved in the fandom at all.

I think I probably started reading blogs semi-regularly sometime in late 2015 and then didn’t start commenting until 2016, so I’m actually a relative newcomer when it comes to the fandom itself. The first blog I ever subscribed to was Preoccupied with Armitage (so funny) in April, 2016; followed by Guylty Pleasure (loved the shrines, *oofs*, & roundups) the next month; then Me + Richard Armitage (lots of info and analysis) in June of that year.

I really enjoyed interacting with everyone that I encountered in the fandom and I found that there were topics I wanted to initiate. I suggested something I thought was kind of funny to Serv, which she kindly posted on her blog, and then there were a couple of little odes I wrote that Serv and Guylty kindly rescued from the comments (here and here). The bug bit me and I started blogging at the beginning of January, 2017.

So, how has my attitude to the fandom changed? It’s changed in that I’ve enjoyed it more and more and participated in it more fully (at least in the blogosphere). I went from being a distant observer to a fairly active commentator and then to a blogger over a period of a couple of years.

H — How has your attitude to RA changed over your time as a fan?

When I first started reading about RA and watching interviews with him, he seemed to be almost too perfect. I used to think that, compared to me, he sounded much nicer, more polite, more intellectual… I could imagine him sitting in his apartment, reading important books and playing cello. He would never be rude to anyone or smoke or swear.

Of course, then I saw roles where he did swear with ease, and I saw behind-the scenes shots where he was smoking (oh the horror!). (Check out this post at Me + Richard Armitage about RA smoking in and out of character.) I mean, I expected him to be better than me! (Yes, I swear and yes, I used to smoke long ago.)

I was also really taken aback by all of the discussion about Armitage having had a nose job. After looking at lots of pictures, I do think he must have had the bump taken off and his nose made straighter. And I’m sure that made it easier to get roles. It’s just that somehow I thought he would be less vain than that.

I suppose in my mind he came down off of his pedestal and became a real person, and that’s a good thing.

I — What made you come out as a fan and participate in the fandom online?

What finally got me to stop lurking and actually make a comment on a blog was the continuous tweet/delete behaviour by Richard Armitage in June of 2016. It was just so perplexing and infuriating that I felt I had to make this comment on a post at Me + Richard Armitage:

Ok, truly, my head is spinning! Can’t keep up with the tweet/delete routine! These last few days are the first time I’ve been watching closely enough to see the disappearing act, and really it’s pretty annoying. I’m still excited to see some of RA’s new work ( I hope), but this is all perplexing. Who knows why he deletes pretty harmless IMO tweets? But even if they’re deleted by a PR person, that person would be in his employ and so have his approval to do so. So, deleted because he chooses to, in effect. Thanks for all your interesting and insightful posts.

J — Are you outed as a fan among your family and friends?

For sure, my family — it would be pretty hard for my hubby and kids to miss it. My sisters and their daughters know and visit here now and then, as do a few friends. And there are a few trusted individuals at work who know I’m a fan, and even a few who know that I blog, although I haven’t invited them to take a look. If I do in fact start using the keychains I bought yesterday, it might become really hard to keep it a secret!