This post takes me past the halfway point of the challenge at last — at this rate I might be done by Christmas! Continued from here. 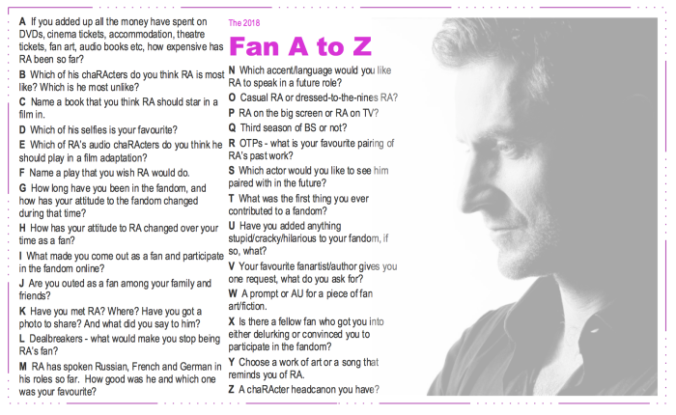 K — Have you met RA? Where? Have you got a photo to share? And what did you say to him?

Unfortunately, I have not met RA. Well, I say “unfortunately”, but I expect that if I saw him on the street I would probably just let him walk by without saying anything. That’s certainly been my experience with other performers that I’ve almost encountered. And then of course I kick myself later!

The only time I’ve really been comfortable enough to talk to a performer I admired was at a meet and greet after a concert where the singer was seated at a table and people lined up to speak to her and have her autograph a CD. That was a good experience, and I was glad to have had the opportunity to tell her how much her music meant to me. I think that I would be okay speaking to RA in a setting like that. But it was a bit more controlled than a stage door experience, from the videos I’ve seen.

L — Dealbreakers — what would make you stop being RA’s fan?

I think it would have to be something like him being racist or committing a violent crime. Or perhaps being intentionally cruel to a fan. I’m not fond of some of his messages that sound preachy to me, but so far they haven’t made me stop being his fan.

M — RA has spoken Russian, French and German in his roles so far. How good was he and which one was your favourite?

I think RA is pretty good at his foreign language efforts. I’ve enjoyed hearing him speak French and German, probably because I have more familiarity with those languages, having taken them in school. I’ve always loved the sound of both, even though they are so different from each other.

As something a little different, I liked the way RA as Uhtred of Bebbanburg pronounced the Anglo Saxon phrase “Wyrd bið ful aræd” or “Fate is inexorable” as translated by Bernard Cornwell in The Lords of the North. (The phrase is from a poem entitled The Wanderer which may have been from a similar time period to the books, though it appeared in an anthology published later.) There’s just something about the way that RA wraps his mouth and his voice around that phrase and the names of the people and places in the audiobook.

N — Which language/accent would you like to hear RA speak in a future role?

You know, we don’t really get to hear enough of RA just speaking in his natural accent (which does sound pretty good), especially with him being in a TV show where he has to use an American accent. So, I’d vote for a British TV show where he can just relax and talk like himself.