I wonder if I can trick myself into thinking it’s still summer, if I go back a month to my Toronto trip. Worth a try, although it’s hard to be fooled after standing in the rain on the weekend watching my son’s first rugby game of the season. The original reason for going to Toronto was to attend a wedding and to visit family, but there was a lot of touristy stuff thrown in too, since my younger son didn’t grow up “back East” like the rest of us.

The trip started out really hot and sunny, so we began the weekend with a swim in the pool and ended it with a trip to Rib Fest to try out the corn bread, blooming onion, fries and of course the ribs. It’s a competition between BBQ places from all over, so you know you’ll get something tasty. The crowds were a bit too much for me, so we took all our goodies back to my sister’s house.

No trip to Toronto is complete without a trip to the CN Tower, which for three decades after opening in 1975 was the world’s tallest free-standing structure at 1,815 feet, 5 inches. It’s still the tallest in the Western Hemisphere, according to the official website. We took the glass-paneled high-speed (15 mph) elevator up to the indoor lookout at 1,136 feet (346 m). It was a cloudy, windy day, but it made for a pretty cool misty picture. 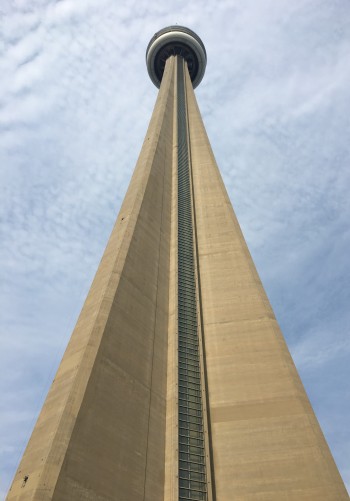 We walked down the stairs one level to the outdoor lookout (fenced-in of course) and looked down through the glass floor. It’s such a long way down that I really couldn’t bear to put my full weight on it! I could only reach out with one foot and had to leave the other on solid ground — such a chicken!

Finally, we went to the Sky Pod, which is at 1,465 ft (447 m). My son would have loved to have done the Edge Walk (picture from the CN Tower website), but the wind was too strong. (So glad my daredevil couldn’t go out there.)

We did a quick day trip to Niagara Falls (Canadian side), which should have been a drive of about an hour and a half, but took a bit longer because of road work. Still, it was a nice enough road trip in good company and well worth it to see the Falls again. 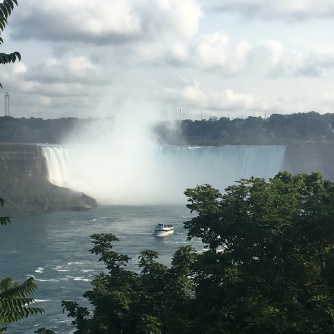 My son’s must-do was the Voyage to the Falls Boat Tour, which is by far the best experience there. (The Journey behind the Falls is okay, I guess, but you’re separated from anything too exciting by wire fences — humbug on safety!) 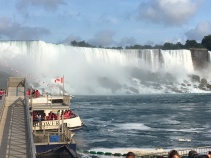 My sister and I thought we wouldn’t get too wet and so we were standing right at the rail when we came closest to the Falls. Apparently, we misjudged! My hair was dripping as much as it had been after my morning shower! The water came at us so fast that I couldn’t even get the plastic hood of the rain poncho up in time. It was a lot of fun, though.

What could be better than attending a feast in the queen’s castle and cheering on your knight in a jousting competition? It’s quite a show and the food is good too — no utensils of course!

We were greeted by a man who reminded me a bit of Sir Guy of Gisborne, if just a bit deficient in the leather department. (The lighting wasn’t great, so neither are the pictures, but you get the idea.) 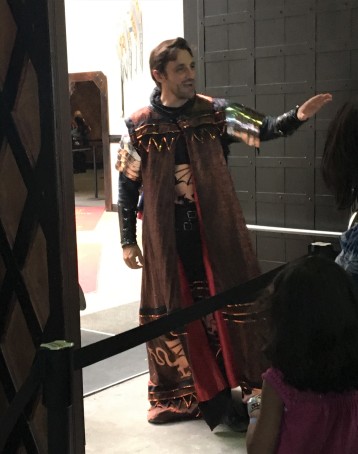 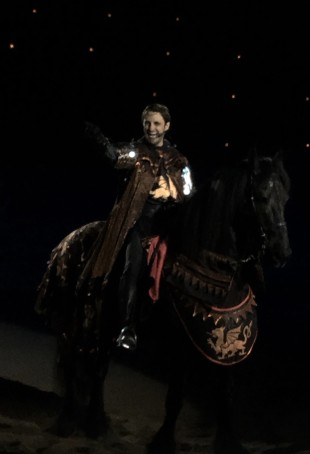 We were in the Black Knight’s section (second knight from the right), cheering and waving our banners. 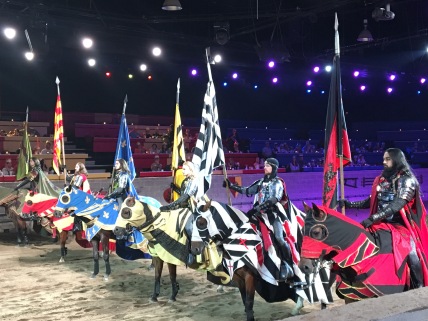 One of them looked a little like Thor. But I have to be loyal to my knight, since he did throw me a pink rose!

When the meal and the show were over, my son and I went outside to walk to the train station. Immediately, it started pouring rain and I was wetter than I had been on the boat at the Falls! This was the day after the flash floods in downtown Toronto, when there was an amazing last-minute rescue of two men stuck in a flooding elevator. They had only a foot of air left when the police got them out! Luckily, we only had to deal with wet clothes.

The weather for the wedding turned out well, and we enjoyed the pub fare at the venue before the ceremony started. 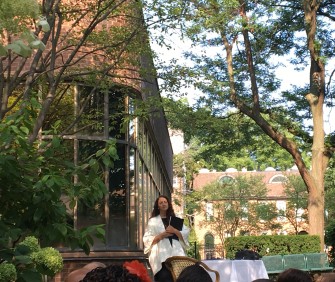 On the Sunday, we visited my husband’s family before heading home on the Monday to recover from all the activity. Somehow I was thinking of the song below, needing “home for a rest”. (Rest assured, though, that I definitely was not “sick from the drink” nor “drunk since I left”!)