The Fall weather can be perfect for enjoying the scenery outdoors. At the same time, there have been some interesting interactions with people (and creatures) around me.

A recent conversation I had at a rugby park:

Older man: “Oh, well I just thought, because that one has long hair…”

Me (giggling to myself): “Right. That one’s my son. He’s into heavy metal.”

The sunny day last weekend when I met the older man:

Later in the conversation:

Older man: “I thought only young people were on their phones all the time!”

Me (thinking, “Wait! Aren’t I young anymore?): “I’m writing something for my blog. It’s really the only chance I get.”

Not only people are out at the rugby parks… on a rainy Sunday a few weeks ago as I sat in the car listening to an audiobook (not Richard) before the game started, I noticed this crow outside my window who seemed very interested in me. Or maybe he likes audiobooks? Crows are pretty smart, after all.

On a rare half-day away from the office, I was standing in line at a Thai place (which despite the name may really be Chinese) in the food court. A senior-aged Asian couple was having a lot of trouble figuring out what to order and how much of their change they needed to give. A man had come out from the kitchen and was speaking to them in their own language trying to sort things out. It was, admittedly, taking a long time, but whatever.

A Caucasian woman (CW) beside me turned to me:

CW (thinking I must be a kindred spirit): “THIS is why I’m moving back to Alberta!” [Based on 2016 census data, more than 40% of people in Metro Vancouver and 21% of people in Alberta are immigrants.]

Me (feigning innocent interest): “Oh really? Why? Do you not like people of other races?”

CW (spluttering): “Oh no, I don’t have a problem with other races. Just with the government’s immigration policies.”

After a bit more waiting, she turned to me again and said scornfully, “You just go right on loving everyone!”

Some Fall colour and a beautiful sunset to distract me from intolerant people:

At my son’s game

On another topic, did you know that the Deadpool movies were filmed in Vancouver? A couple of weeks ago my son was playing hockey at the Agrodome, which he informed me is the same rink where Deadpool chases after someone (very slowly) while driving a Zamboni. They do a lot of filming there — I was just reading that there was a scene from Rocky IV filmed there as well.

I heard on the radio that there is going to be snow soon in Toronto. But what the heck was this little bit of snow doing in the driveway next to my office? Must have fallen from a truck or something I guess, but it still was not something I wanted to see! Unlike this beautiful rose that is currently in bloom in front of my house. 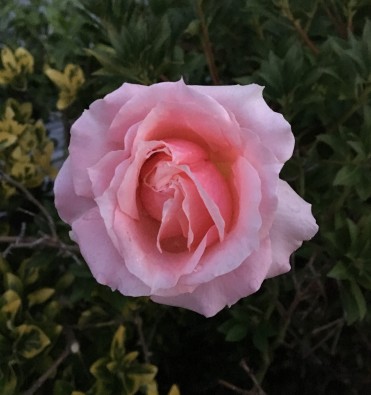 And lastly, as I was trying to get in my front door today, I heard a very loud, “Meow”, as my neighbour’s cat quite insistently had decided that he should be allowed in the front door. Quite a conversation ensued, until I finally had to get my husband to come and pick him up from inside our front hallway. He brought the cat in to look at the dog, telling him that THIS was why he was not allowed in our house… the dog was not amused, but frankly couldn’t be bothered to rouse himself. Some protector! (But he’s cute, so we let him stay.) 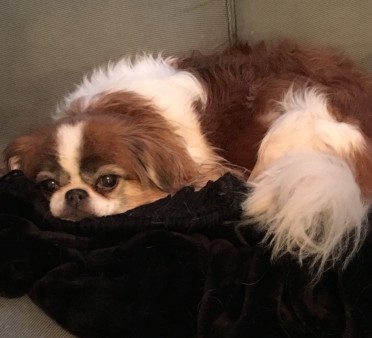