My Younger Son has been binge-watching The Walking Dead on Netflix.  I keep thinking that the theme song reminds me of something. Okay, call me crazy (and he did!), but the first 3 melody notes (while in a different key and with fuller instrumentation) sound like the first 3 notes of the BBC North and South theme!

Have a listen and see…

And by the way, if you are in Canada, North and South is only on Netflix until February 1 !

On another note, have you Googled Richard Armitage lately?  Have you noticed that the wrong North and South is pictured? 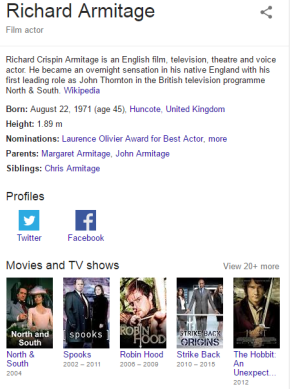 Apparently, according to Google, this joint miniseries stars Patrick Swayze, but the cast includes Richard Armitage!

That’s all for now!